It’s American Clean Power Week 2022 and the timing could not be more fortuitous. This year, we are celebrating the thriving clean energy industry – wind, solar, energy storage, and the transmission infrastructure that carries power to our homes and our workplaces – as our elected officials pass the largest clean energy and climate legislation in our country’s history. Implementing the Inflation Reduction Act (IRA) of 2022 by both the Senate and the House is a transformative step forward for the way Americans will power our lives, dramatically accelerating the building of our clean energy economy and our global fight against climate change over the coming decade.

To call this bill a game changer is an understatement. After more than a decade of uncertainty and delays, this $370 billion investment in energy security and climate change programs over the next 10 years will finally give our clean energy industry the long-term assurances it needs to begin to reach its full potential. The IRA will drive investment in domestic clean energy deployment, American jobs, and energy independence and will help us meet the nation’s bold climate targets. It also sends a clear message to the rest of the world that the United States is serious about leading the global energy transition.

As the country moves toward electrification, increased deployment as a result of the IRA means that clean power will support around 40% of total U.S. electricity demand by 2030 – enough clean energy to power every home in America. This power will be more reliable, with billions in funds from the IRA going to support transmission deployment to deliver clean energy over long distances to where it is needed most, along with support for energy storage to help store energy from renewable sources for when they are needed most. This also means more jobs for American workers. Clean energy is building the next generation of American manufacturing jobs and is already employing nearly 443,000 workers, with wind turbine technicians and solar installers already among the fastest-growing occupations in the U.S. With investment enabled by the IRA, the clean energy workforce will more than double to meet the demand for building new projects, adding another 550,000 jobs to the American workforce and employing nearly 1 million Americans by 2030. 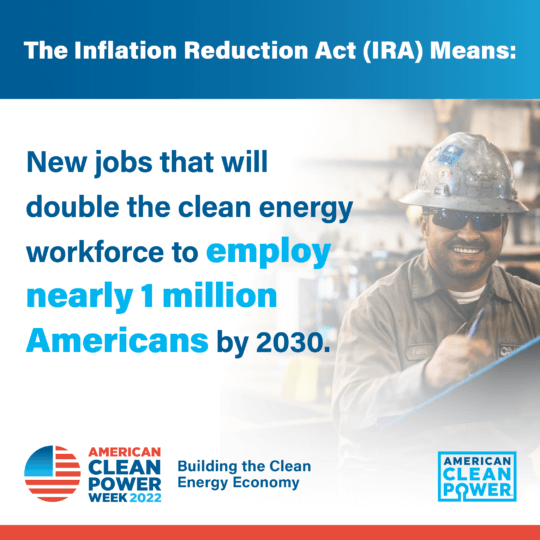 Americans will see the direct impact of this growing industry in the coming years whether they work in one of those 1 million good-paying jobs or just benefit from decreased cost of electricity. The average American consumer can expect to enjoy over $1,000 per year in energy savings by 2030 – resulting from lower electricity costs, lower home heating costs thanks to a shift in electric heating, and lower mobility costs thanks to electric vehicles that will be increasingly powered by wind and solar. On top of that, the industry will provide almost $300 billion in wages and benefits to hard-working Americans workers in the 1 million-strong clean energy workforce across the country.

The IRA will, at last, advance America’s ambition to decarbonize its electric grid and significantly reduce emissions by ushering in a transition to majority zero-carbon energy sources like land-based wind, offshore wind and solar. This bill will drive an estimated 40% reduction in economy-wide emissions by 2030, relative to 2005 levels, keeping America within striking distance of the country’s emissions goals – and keeping American air clean. It has been no small feat getting this historic bill across the finish line. Throughout the rest of American Clean Power Week, ACP will join with our member companies from across the clean energy sectors to highlight the incredible impact that this growing industry, bolstered by new unprecedented investments in the IRA, has on our economy, climate, and the lives of the American people.