Stronger state renewable portfolio standards (RPS) were a common trend in 2016, with state lawmakers from Rhode Island to Oregon voting to increase their states’ share of renewable energy.

There’s a good reason why so of them are choosing these policies: they create large net consumer, employment, health, and environmental benefits, according to a new study this week from the National Renewable Energy Laboratory (NREL) and Lawrence Berkeley National Lab (LBNL).

Building on last years’ study of historical benefits, researchers explored the future costs, benefits and other impacts of renewable energy that will be used to meet RPSs between 2015 and 2050. They examined the future impacts of both existing RPS policies and a high renewable energy scenario in which almost all states adopt ambitious RPS targets, compared to a baseline scenario of no RPS policies.

As shown below, researchers find existing RPS policies will create 4.7 million job-years of employment. The study also found $258 billion in health and environmental benefits from reduced air pollution and a four percent reduction in energy-related water consumption. Each 1000 kilowatt-hours (kWh) of renewable energy (roughly the amount of electricity used by a typical home in a month) saves 290 gallons of water. These benefits result from state policies driving renewables’ share of the U.S. electricity mix from 34 percent to 40 percent in the year 2050.

Best of all, in most cases these benefits can be achieved at no net cost, and in some cases electricity prices could be reduced by up to 2.4 cents per kilowatt-hour. 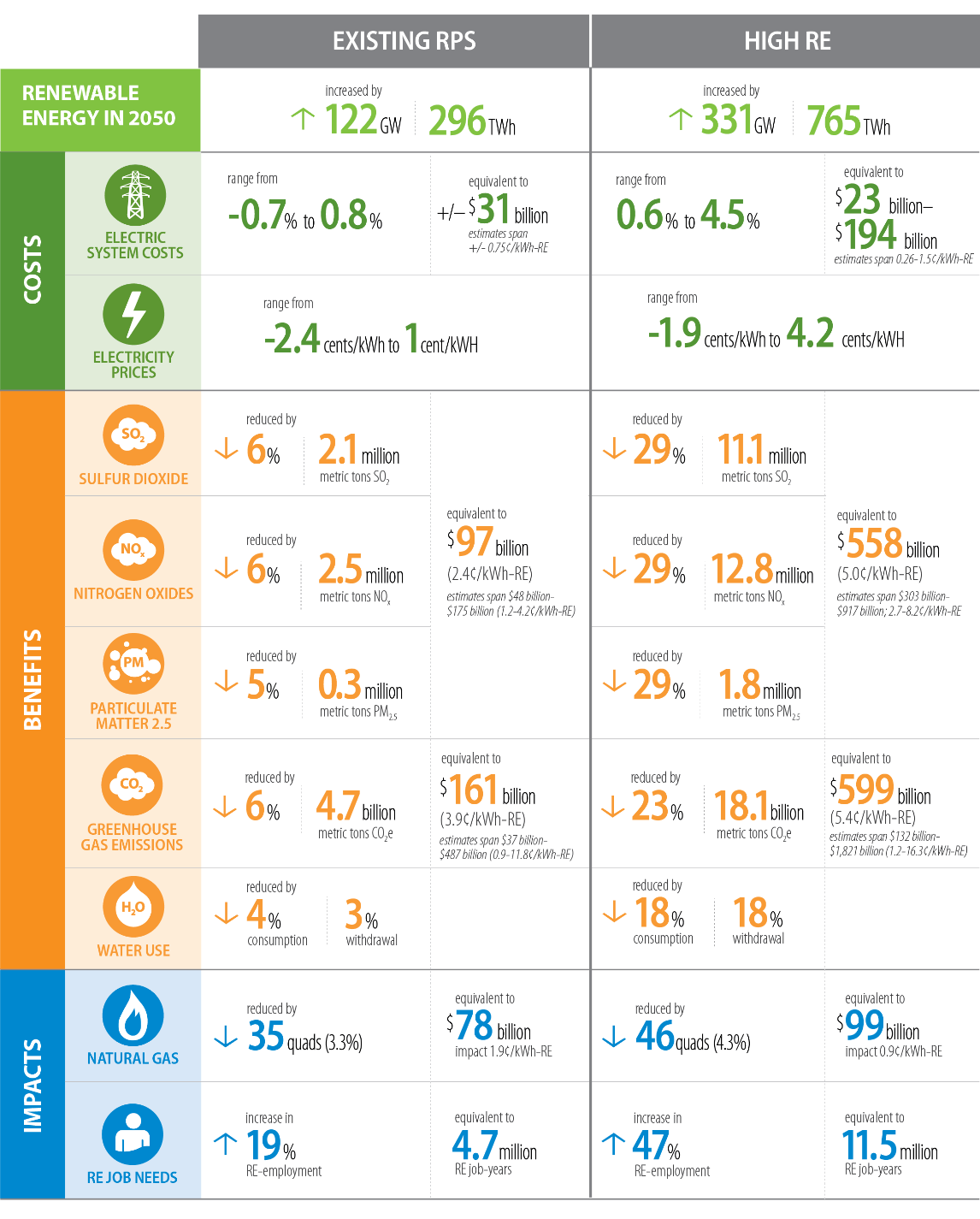 The report translates the benefits of wind and other renewable energy into per-kWh increments, showing that they provide a large bang-for-the-buck that greatly outweighs any potential costs.

Specifically, the study found each kWh of renewable energy provides around 3.9 cents/kWh in economic value from reducing carbon pollution and 2.4 cents/kWh from cutting other forms of air pollution. Overall air pollution benefits total around 6.3 cents/kWh.

These benefits are much greater than any potential RPS policy costs. The effect of using more renewable energy to meet state electricity demand has a minimal impact on, and in many cases reduces, electricity prices.

Across all renewable cost and fuel price scenarios, the maximum electricity price impact is estimated at just 1¢ per kWh, while in other scenarios consumers could see a price decrease of 2.4¢ per kWh. The New England and Pacific regions are the only areas expected to have a noticeable increase in their electricity prices. Meanwhile, electricity prices are estimated to fall in the Mountain West, Midwest and Mid-Atlantic regions as these states add more renewables to their systems.

The report’s results also highlight wind’s role in helping to stabilize electricity prices and protect families and businesses against energy price spikes. Much of the uncertainty range in electricity price estimates on impacts from RPS policies is actually caused by uncertainty about future fossil fuel prices, which determine the competitiveness of renewable energy relative to fossil fuels.

Wind energy reduces this fuel price risk as wind’s fuel cost will always be zero. The Department of Energy’s Wind Vision report confirms that adding more wind energy to the grid limits consumers’ exposure to volatile fossil fuel prices. The findings show existing RPS policies save natural gas consumers $78 billion by reducing the price of natural gas, which benefits everyone from homeowners with natural gas furnaces to factories that use gas to farmers who use fertilizer produced from natural gas.

Expanding RPSs to all states

This scenario projects renewables will increase to 49 percent of U.S. electricity generation by 2050. In such a world, air pollutants like sulfur dioxide, nitrogen oxides and particulate matter are each reduced by 29 percent compared to a no-RPS scenario. This leads to $558 billion in health and environmental benefits. CO2 emissions decrease by 23 percent, or 18.1 billion metric tons of carbon dioxide equivalent, creating $599 billion in benefits. Water consumption decreases by 18 percent.

Renewable energy employment would also see a huge boost, increasing by 47 percent for a total of 11.5 million full-time job-years.

The substantial benefits of state renewable standards more than offset any electricity cost increases. In most regions, the renewable policies are a win-win-win – providing economic value from both pollution reduction and lower electricity prices while creating jobs. So it’s no wonder we’re likely to see more lawmakers turning to RPSs again in 2017.